My next subject is Brandon Mahler, who you might have met during his tenure at Drake’s. He worked his way up from manager to running operations for the brand, throwing fun events and hosting smart pop-ups to bring a sense of New York City community to the storied British brand’s Manhattan outpost. Recently, he’s been hired by another downtown mainstay, Aimé Leon Dore. Though he is a transplant from Houston, he fits right in here in the city, both in dress and in attitude. Like most of the friends I’ve made (and kept) in fashion, his interests also go far deeper. He has that unique spark that makes you feel like you’ve known him your entire life, and I’ve seen him extend that warmth to complete strangers, too.

Below, we discuss Brandon’s career path, what his role at Aimé Leon Dore entails, what he thinks about men’s fashion (for better or for worse), music, and more. 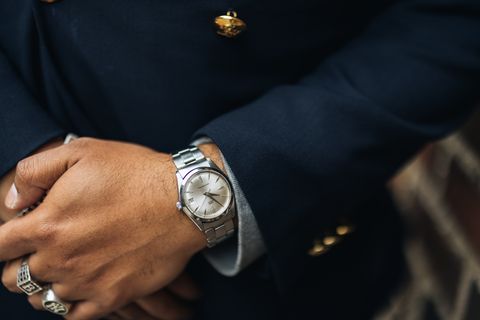 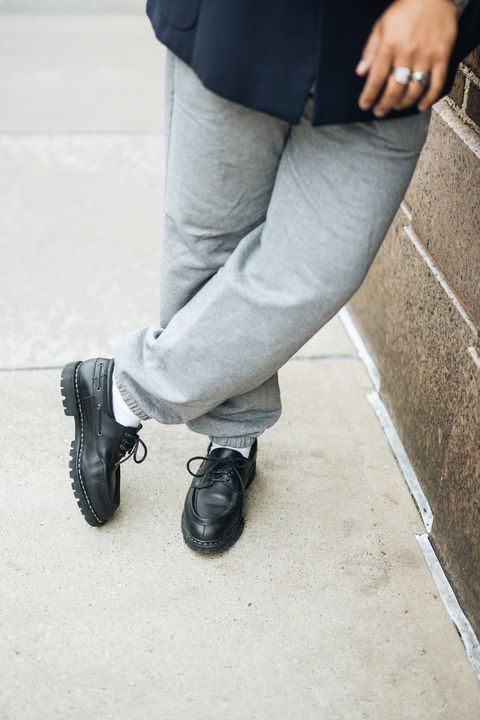 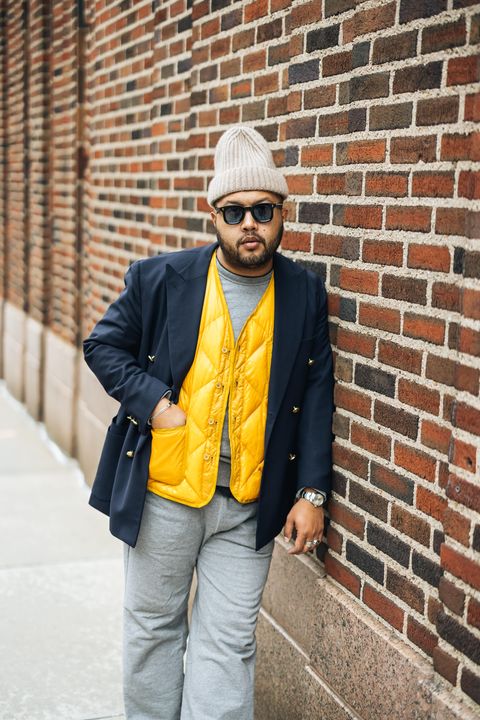 Talk to me about your journey from Texas to New York. What was your first job in New York City, and what are you currently doing here?

I’ve been here for about five years now. I moved here for a job with Drake’s as their operations manager and handled pretty much everything pertaining to U.S. operations at that time. Before that, I was a men’s buyer for a store in Austin. I used to come here for market appointments and would tour multiple times a year. I used to play in a band—kind of still do?—and helped my friends’ bands as a tour manager for a while in between trying to figure out if I still wanted to work in clothing after my buying job.

I’m currently at Aimé Leon Dore as the global visual merchandising manager. I’ve been also trying to work on my apartment as much as I can—get my yard and living space situated. I’m trying to take more time to myself to be more creative, take more photos, see more things that get me going. It’s very easy to come to NYC and dive straight into work, which is what I did when I first got here. I’m trying to take care of myself a little more mentally and physically. Trying to stimulate myself more everyday. There are a lot of parallels with my job and personal life at the moment. Feels very full circle. I know there’s room for growth in everything I’m doing and that feels promising.

Your role with Aimé Leon Dore is very new, right? Can you tell me what the job entails, and why you wanted to work for the brand?

I’ve been friends with Teddy and everyone at the brand for a couple of years, pretty much since I started at Drake’s. I’ve always felt connected to the brand and there is a lot of warmth around that team. I’m in charge of visually planning how the store looks. I think it’s really important to paint the full picture and tell the full story for what’s going on in the stores without telling too much, if that makes sense? I’ve always thought what the brand was doing was niche and fits in its own lane. It’s such a great team to be a part of. I feel like I’ve been family there forever, but now it’s official. 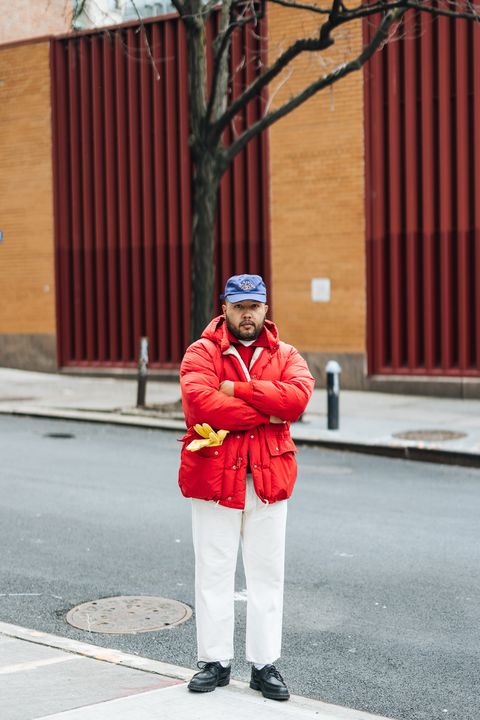 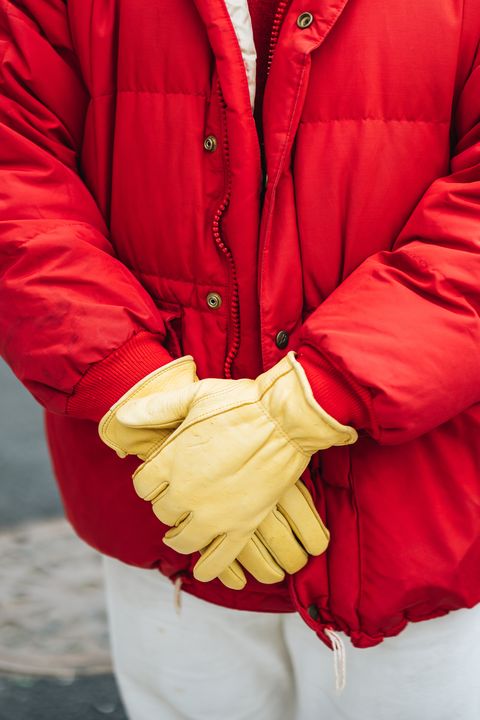 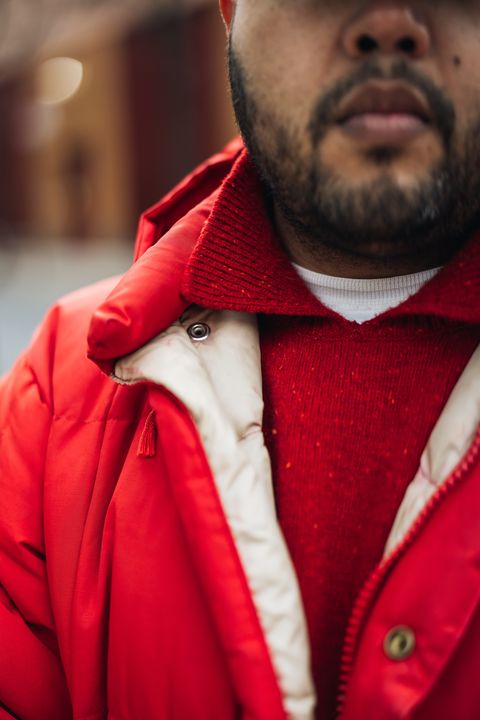 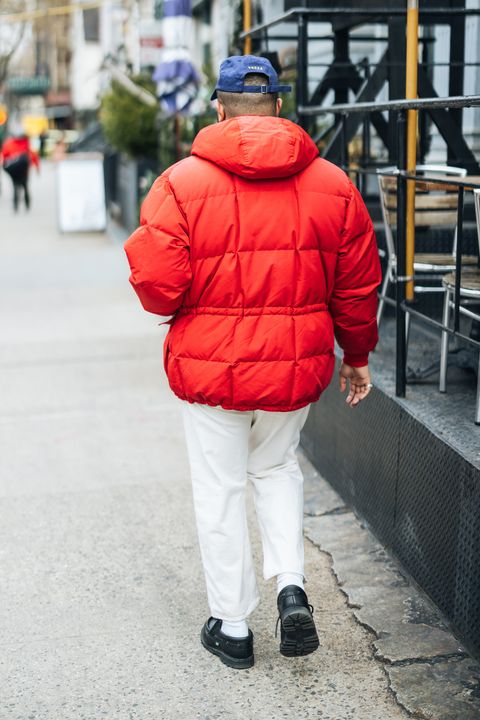 What do you think about men’s fashion as it currently stands? What are some things you’d like to see in the space that might not exist or seem prevalent at the moment?

I feel like I change my mind constantly about men’s fashion and clothing as it stands. Everything exists. We’re good. If anything, we’ve got too much shit. I just like companies that make a good product. If they’re authentic to themselves and what they do, then good. I’m always looking for something, but my taste isn’t everyone’s taste.

I flip-flop a lot. I used to feel like it was more of a subculture, where you’d see people in cool clothes and be able to have a conversation. I also used to think that was part of me coming from Texas, but when I think about it I used to come here in 2012 or 2013 in stuff like Visvim, Comme, and WTAPS all together and people would still strike up a conversation about what I was wearing and they’d be genuinely excited about it. They’d enjoy being able to talk to someone about something they’re passionate about. That’s how I made so many good friends here in NYC. I was hanging out at stores and buying and sharing stories. That’s definitely changed a lot.

There’s a huge part of me that’s happy about where men’s clothing is. Without the influx of people interested, I wouldn’t have had as many opportunities professionally. When I first got into men’s clothing and fashion it was much harder to find things I wanted. We had to truly thrift and dig for things, much like the world of punk and hardcore. Curated multi-brand or specialty vintage didn’t really exist. The internet wasn’t as huge and it was harder to find “made in USA” shoes or whatever you were looking for. You had to really research and educate yourself on what was good and what made items worth it. I went through so many phases before I found out what I really wanted to wear and do clothing wise. And I still have a crisis from time to time and think I have nothing to wear.

Now, it seems like everyone has a brand. Or everyone knows everything about everything. I’m always joking about bringing back gatekeeping, but maybe I’m half joking because I feel like a huge part of what needs to happen with men’s clothing is education. Or transparency? There are so many people who don’t understand what goes into clothing and design at the end of the day, and complain about price and just look for the cheaper thing without understanding why something should cost what it does. Or maybe I’m good with people just doing whatever the fuck they want because at the end of the day it’s just clothes. 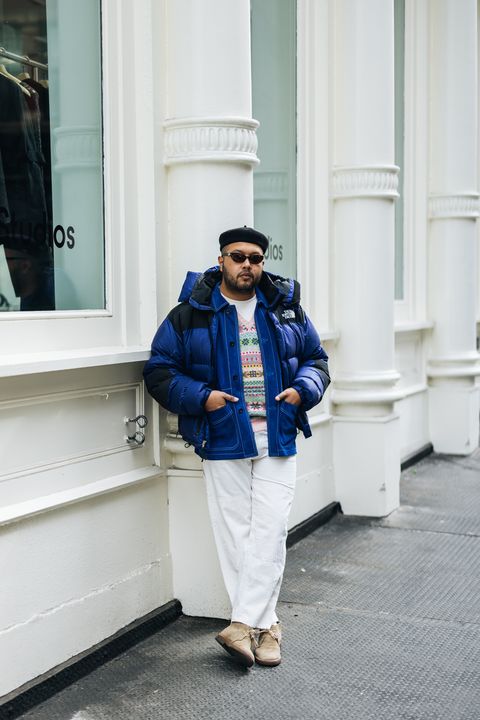 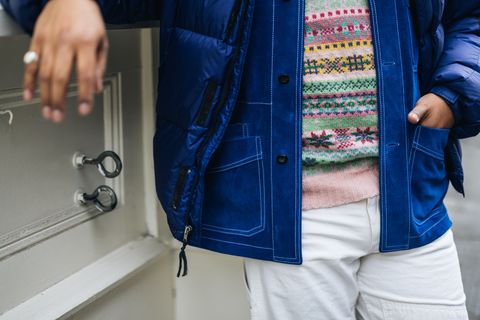 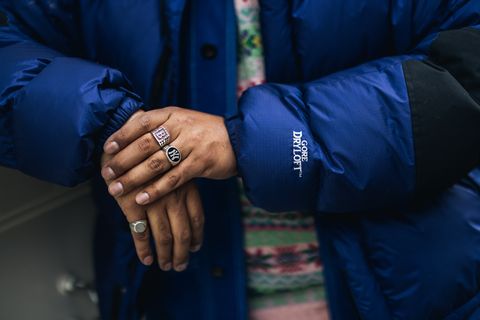 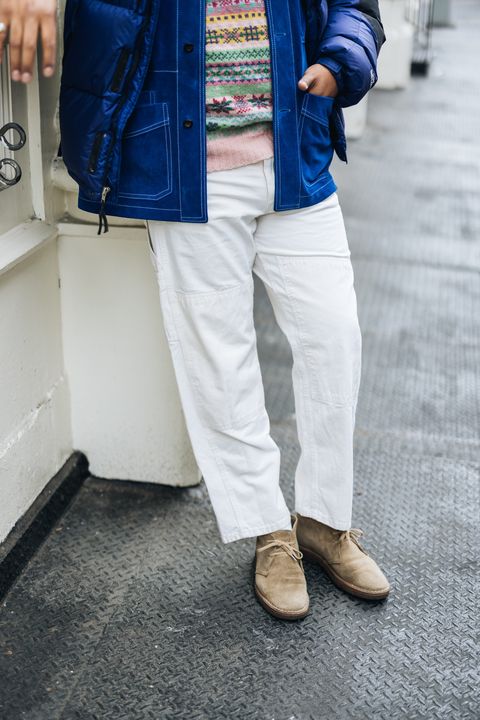 How did you begin your fashion journey, and how has your style evolved since your initial interest? What are some of your favorite items you own?

I think I’ve always liked clothing. For as long as I can remember—I think when I got to middle or high school—I’ve been influenced by the things I was into: skating, music, movies. I attended a public school with a uniform, so I felt like I wanted to differentiate myself from everyone else. I started thrifting in middle school looking for old Ralph Lauren oxfords and polos. I started learning about made-in-USA stuff and kept buying that, and old military stuff, and kind of became obsessed.

When I was finishing college I started a job at Gucci, and I think that really threw me into designers and other brands I really liked. I was big into eBay and reselling some of my vintage finds, so I was pretty much selling all this Americana stuff and buying Japanese designers (Comme, Yojhi, WTAPS.) Back then I was buying this stuff for nothing and mixing it with the Americana and military stuff I was holding onto. When I started working at By George, I was just fully into what we were selling. They used to have an amazing roster: Dries, Engineered Garments, Camoshita, Lemaire, Loewe, Veilance, Visvim, LVC… Mixed all that stuff together and had one wild wardrobe. I’ve outgrown a lot of that stuff—physically—and sold it off but it really shaped my style evolution and I figured out what I liked because of it.

It’s funny because I think I’ve almost come full circle. I’ve kept so much stuff from back then, but also have mixed that in with what we do. Which is a lot of what I was wearing when I first got into clothes: loafers, military stuff, oxfords, et cetera.

I think most of my favorite items are vintage. I love my band T-shirts. I wear them when I’m not working. Lots of hardcore, metal, and punk shirts, some Britpop and other things sprinkled in there. Vintage outerwear is my weakness. My ’60s REI parka is one of my favorite things I own. I recently found some ’90s Armani rain jackets and a ’60s double-breasted leather jacket. 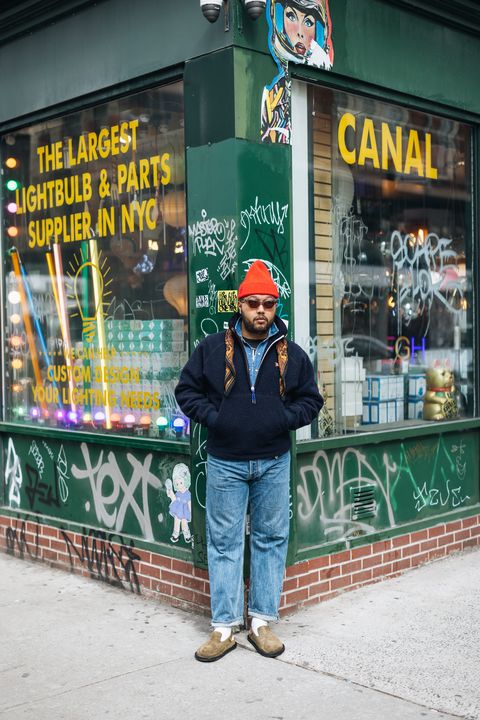 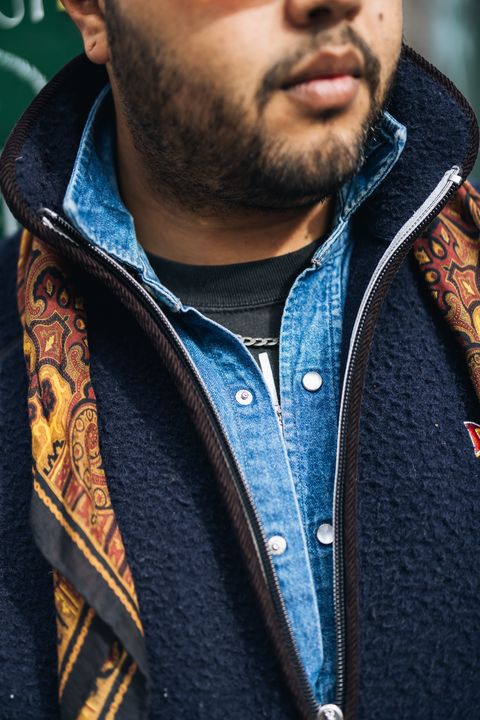 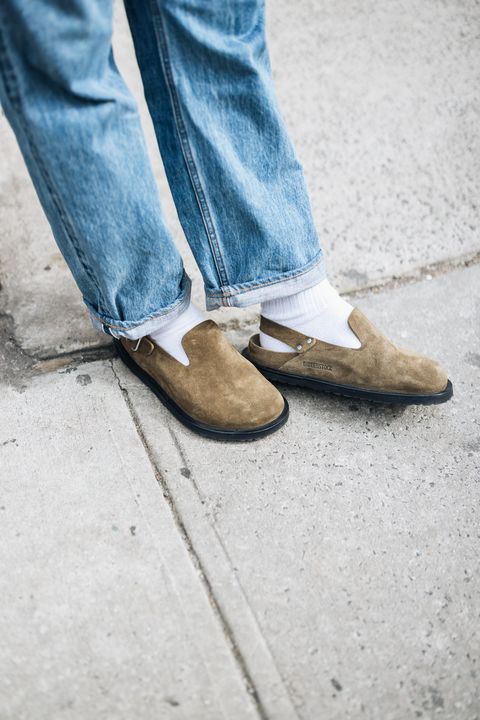 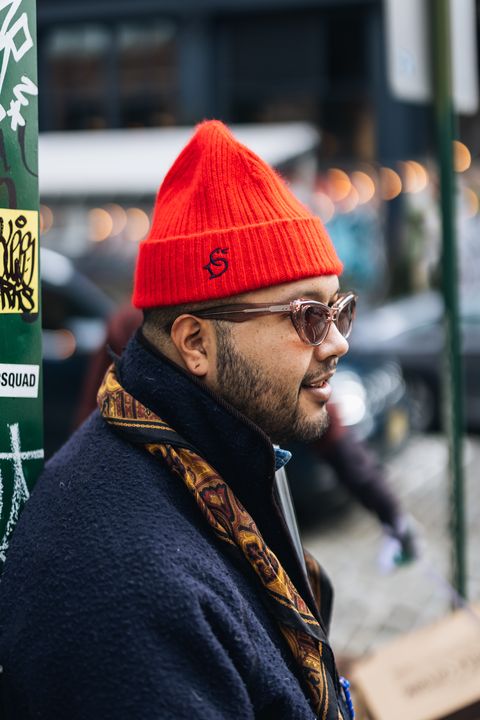 As a fellow music nerd, I would love for you to give our readers some recommendations. What are you loving at the moment, and what are some classics you always come back to?

Yeah of course! I love talking about music. I’ve been having such a hard time finding and listening to new music lately so I think my “classics: are a good shout. 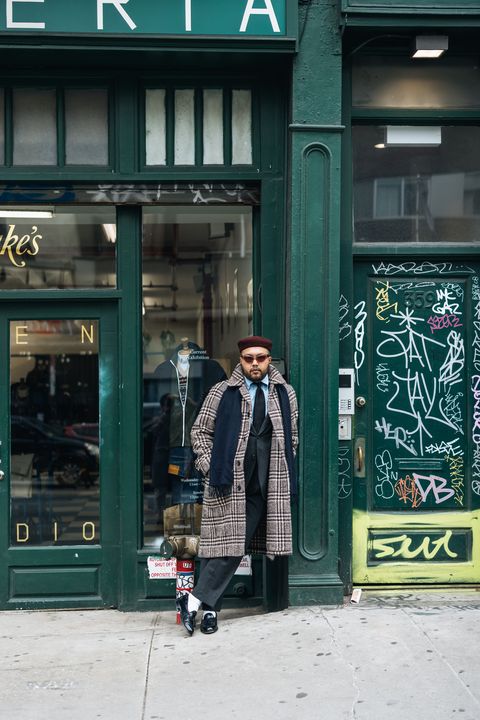 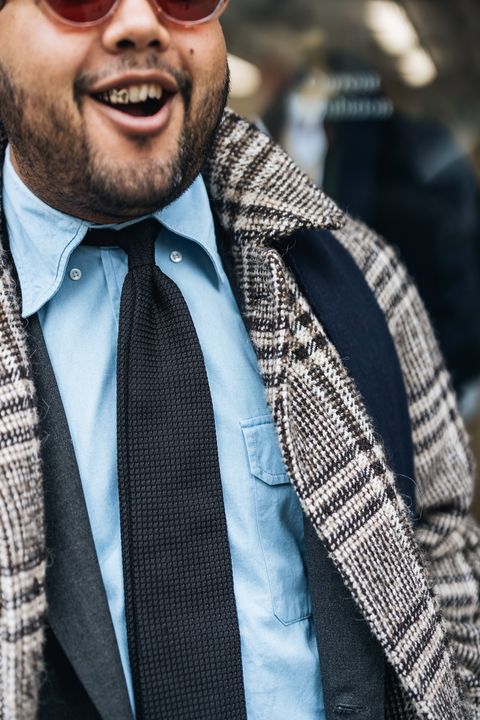 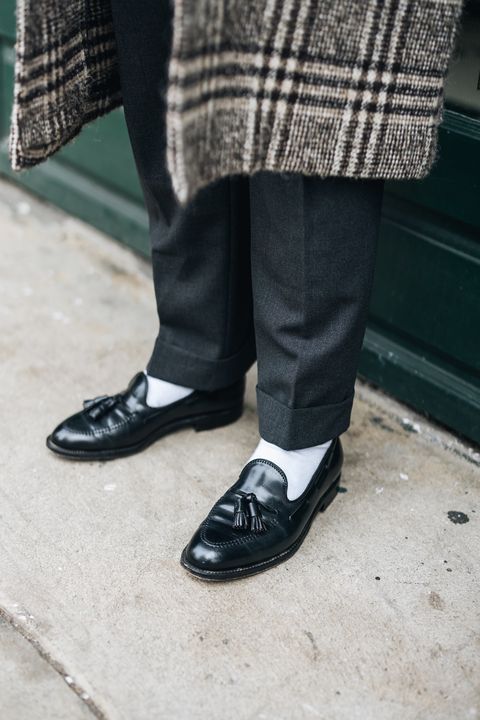 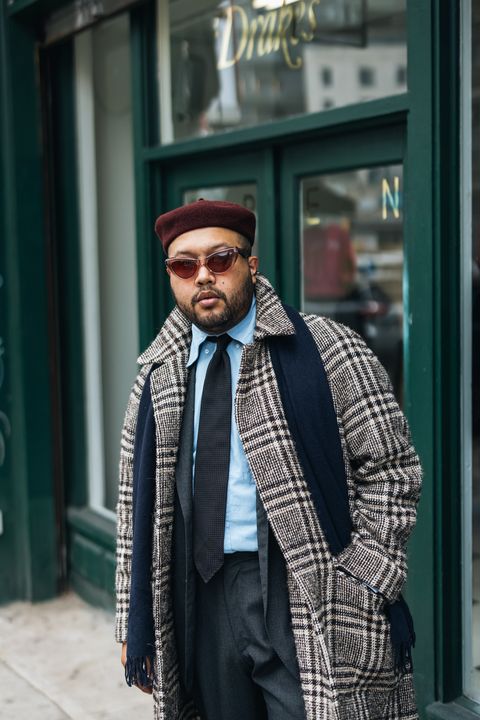 Can you also provide some NYC recommendations for the traveler who wants to see the city like a New Yorker?

I’ve said it a million times, but if you want to know what’s good in a city, go to a local cool shop or bar and ask them what’s up. They’re most likely more clicked in than whatever concierge is around.

Here are some places I’ve been visiting for things in and around SoHo: Olives for what I think is the best turkey sandwich in the city; grab it and head to any bench a couple of blocks away. Get a cookie and a lemonesso if you’re not hungry enough for a sandwich or to save for later. Goods for the Study, because there’s nothing like a new pen or notebook. I write things down a lot. CHCM, which is the best mulitbrand store in NYC. And Compagnie to get a glass or bottle of some good stuff, and a nice grilled cheese, too.

Christopher Fenimore is a writer and photographer living in New York. Working with clients ranging from clothiers to vineyards, he’s also covered street style for a number of outlets. Follow him on Instagram at @c.fenimore.