Tottenham Hotspur striker and 2021-22 Premier League Golden Boot winner Son Heung-min is not only praised for his accomplishments in football — he’s also moving “forward” in the fashion world.

Since launching his own apparel brand NOS7, pronounced “N-O-S-seven,” last month, Son has been promoting it by sporting looks at the airport, opening a pop-up store which saw queues of three hours and gifting his teammates with items from the line.

When the Tottenham Hotspur squad landed at the Incheon International Airport, they were greeted by Son, holding a sign that said “Welcome to Seoul.” The team arrived in Seoul on Sunday to prepare for two exhibition games: against Team K-League at the Seoul World Cup Stadium in Mapo District, western Seoul, on Wednesday, and La Liga side Sevilla at Suwon World Cup Stadium in Suwon, Gyeonggi, on Saturday. 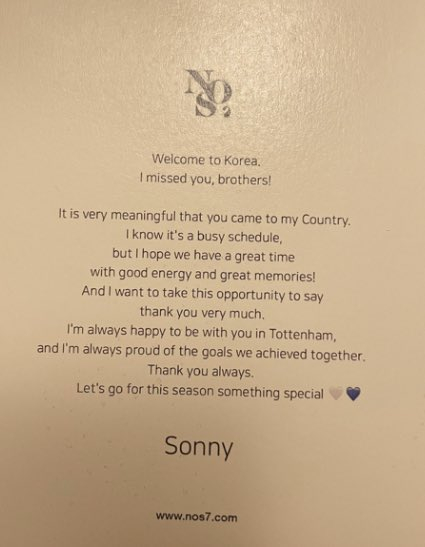 The letter Son wrote for the Tottenham Hotspur squad, welcoming their arrival to Korea. [THE SPURS WEB]


On Monday, The Spurs Web, an official news source for the team, posted on Twitter a letter written by Son with the NOS7 brand logo stamped on it, with the caption “Son Heung-min is incredibly wholesome.”

“Welcome to Korea. I missed you, brothers!” the letter reads in English. “It is very meaningful that you came to my [country]. I know it’s a busy schedule, but I hope we have a great time with good energy and great memories! And I want to take this opportunity to say thank you very much. I’m always happy to be with you in Tottenham, and I’m always proud of the goals we achieved together. Thank you always. Let’s go for this season something special.”

A reply tweet shows a photo of a present in a hotel room, suggesting that each of the players was gifted with a NOS7-related product.


NOS7 was first spotted by the public when Son returned to Korea in late May with his Premier League Golden Boot trophy in hand. Son had just written history by becoming the first Asian player to win the prize. He was wearing a white NOS7 t-shirt.

The NOS7 logo on Son’s t-shirt was conspicuously shown in all the photos from that day, so fans and the media were quick to question its meaning. Many speculated that it was a combination of Son spelled backward and a reference to his jersey — No. 7.

Other fans said that NOS7 can also be an acronym for “Nice one, Sonny,” a phrase from a chant fans sing for Son during matches. 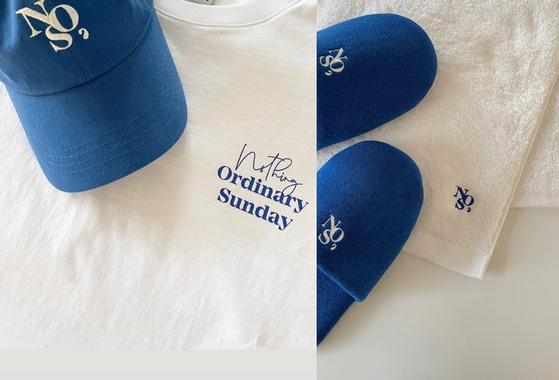 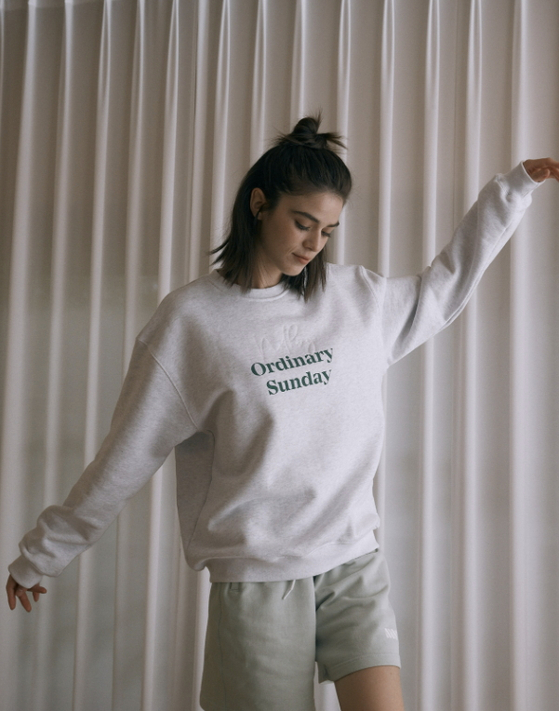 A model wears a crew neck sweatshirt from NOS7 [NOS7]


According to the brand’s website, NOS7 stands for “Nothing, Ordinary Sunday.” NOS7 values “a relaxing weekend after a busy week” and “time to reflect on yourself by taking a step back.”

The brand was later revealed to have already been trademarked by the Korean Intellectual Property Office, ranging across clothing, shoes and headwear. Multiple local reports said that Son was registered as the executive director and his aunt as the CEO. 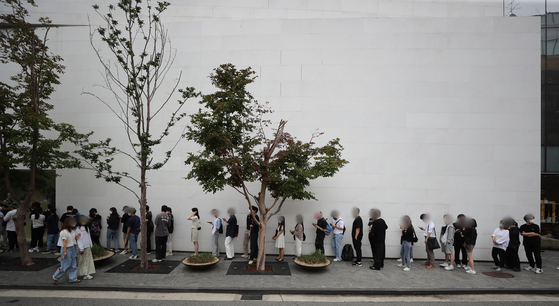 On June 17, the day of the opening of NOS7’s pop-up store in Cheongdam-dong, southern Seoul, a long line of potential buyers stood outside the building. [NEWS1] 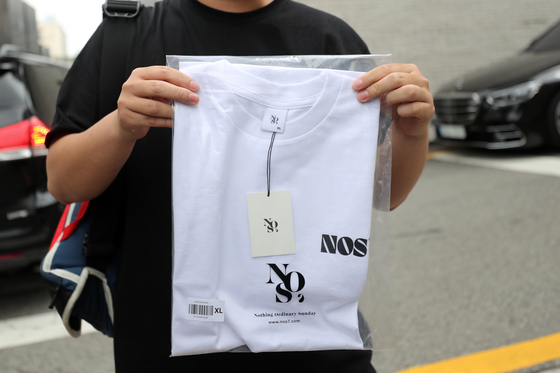 Opening day attracted hundreds of potential buyers who queued for hours outside the building in Gangnam.

Currently, on the website, the t-shirts are completely sold out, as well as the baseball caps, phone accessories and glass cups.

However, there have been divided opinions about whether NOS7 products are really worth the price. 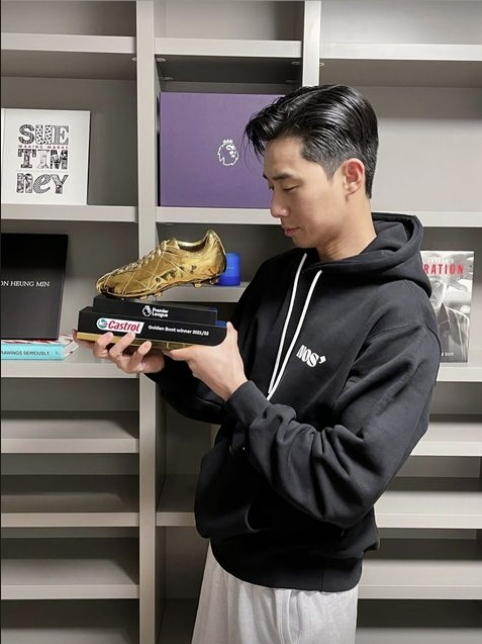 
People left comments on Naver that the products were pricey, in particular, the 43,000 won slippers. “Is the quality that good[?]” one comment questioned in an online cafe. “It’s too expensive,” another reads. “Even if the design is neat.”

A YouTube channel with the handle “Ronna,” which reviews fashion items and has over 10,000 subscribers, said that it is “understandable to pay some 70,000 won for the mint color t-shirt if you are a fan of Son and are in favor of the brand,” but that “the white t-shirt’s stitches and label were not as good for the same price.”

The video, which has been viewed over 20,000 times, complimented the quality of the crew neck sweatshirts.

“I’m curious about what the brand has in store for the future,” said Ron Park, one of the channel’s owners. “I wonder if its products will become trendy items. Son has such a great reputation that I think NOS7 will become a hit as well.”

Celebrity fans will undoubtedly boost the brand’s popularity too.

Last month, actor Park Seo-joon, known to be close with the football player, posted a picture on social media holding the Golden Boot trophy and wearing a black NOS7 hoodie at Son’s house. 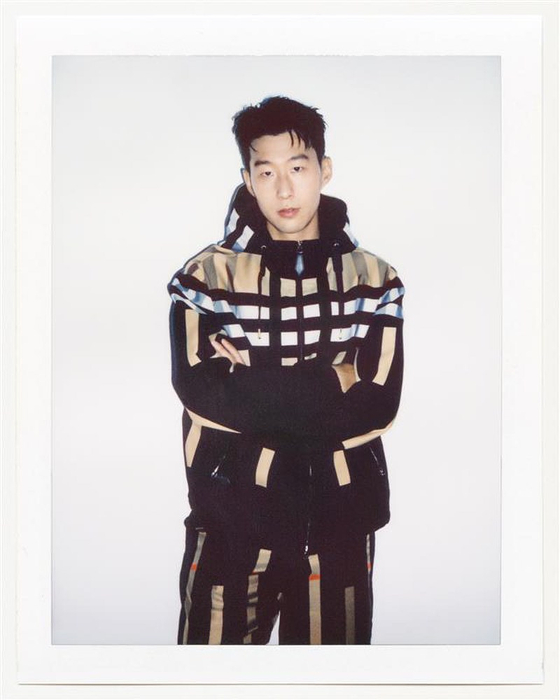 Son is the new brand ambassador for Burberry. [BURBERRY] 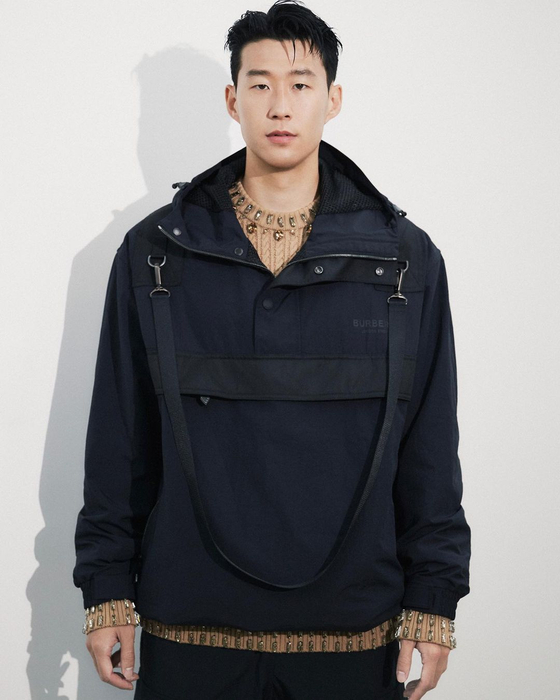 Son is the new brand ambassador for Burberry. [BURBERRY]


NOS7 is not Son’s first foray into the fashion scene — he is also the brand ambassador for Burberry.

The British luxury fashion house revealed in mid-June an exclusive interview with the athlete, in which it states in English that he said it is “surreal [to] have become Burberry’s ambassador,” and that he is “happy to join the Burberry family also because I am playing in the [British] Premier League.”